After logging in, you can use the navigation on the left to navigate through the various page areas. 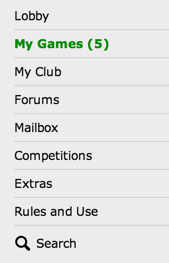 The lobby is the first page you see after logging into chessmail. Here, you can see which chess players are online and use the member search function.

The list shows your chess matches, and you can start new games here.

Here, you can found a new chessmail club or visit your club.

The chessmail forums are used as a communication platform for chessmail members. Here, you can discuss chess or other topics. There are different sub-forums for different subjects, such as chess exercises, commentated chess games and help if you are experiencing problems with chessmail.

Members can send each other messages. If someone has sent you a message, the menu item turns green and an envelope icon appears.

Regular tournaments are organised on chessmail. Demonstrate your ability in a tournament, or organise your own. A ranking list shows you the best players on chessmail.

Under "Extras" you will find an online chess computer and the chessmail wiki.

You can use the online chess computer to play a quick match against your computer.

The chessmail wiki can be edited by chessmail members and used to organise tournaments, for example.

If you have questions on how to use chessmail or want to look something up in the chess rules, you can do this under "Help and rules".

The full text search enables you to search chessmail, the chessmail help and the forums.

In the user settings, you can change your email address and password, as well as a number of other preferences.

chessmail has a rating system that makes it easy for members to find opponents at their level.

New chessmail members need to complete 10 games before they are given a rating.

After completing a rated game, both players have their ratings re-calculated. The calculations are made based on the players’ ratings before the match began.

Ratings are based on the Elo rating system, as described on Wikipedia. chessmail uses the following formula:

Once the game is over, the rating is calculated using expectation EA.

The points the winner receives are deducted from the loser.

When you are invited to a chess match, the thinking time can be set to between 24 hours and 30 days per turn.

If your opponent exceeds the thinking time, the match is displayed in red in your "My Games" list.

You can then end the game in your favour in the detailed view for the game. However, you don’t have to do this, and can refrain from doing so if you know your opponent cannot play right now, for example.

You can set pauses in your user settings.

You can still make moves during a pause in chessmail, but the thinking time for moves is extended by the pause time.

Shortly before an opponent's pause, you will see a pause time in your list of running games with the (P) mark.

Pauses can be aborted.

Member names – the pseudonyms of the chessmail users – are colour-coded and have different fonts to indicate their status.

You can also change your user settings to only receive personal invitations from such members.

Chess clubs have their own forums where club members can discuss internal club matters.

Club members can be administrators or moderators of the club.

You can only be a member of one club at a a time, but you can be a guest in as many as you want. Club guests can post in the club’s public forum, but cannot read any internal club posts.

The club's public forum is visible to everyone.

Club administrators can start chess tournaments. The number of tournaments, a club can start, depends on the size of the club.

Chess matches that have been going for more than 90 days since the last move are deemed cancelled, and can be ended automatically or deleted from the database.

The data for members who have not used chessmail for 5 years can be deleted. This includes mailbox messages and games, for example.

You can terminate you membership via your user settings. The personal data of members who have terminated their membership, such as their e-mail address, is deleted from the database. Games played by former members can be kept in the database.

You cannot terminate your membership if you have any ongoing games.

As a user of chessmail, you must accept the chessmail Terms and Conditions of Use.

You can find further information about chessmail in our